To a Thousand Generations, Part 1… by Annalize Mouton 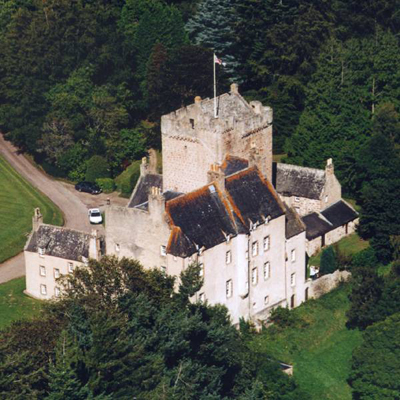 Deuteronomy 7:9 Know therefore that the LORD your God is God; he is the faithful God, keeping his covenant of love to a thousand generations of those who love him and keep his commandments.

Through the Lord’s grace, I was born into a very large, loving, God-fearing family, with a very rich spiritual history going back hundreds of years. My mother’s maternal great-grandfather John Rose, a master stone mason, came to South Africa in the 1840s. His ancestral home was Kilravock Castle (above) near the village of Croy, between Inverness and Nairn, Scotland. Of one of his ancestors, the tenth laird of Kilravock, also known as the Black Baron (because of his swarthy complexion), it was said that “his mastery of the secret of peaceful co-existence became renowned throughout Scotland and when asked by Mary Queen of Scots’ son James VI who visited Kilravock in 1589 how he managed to live among such violent neighbours, his reply was: “They are the best neighbours I could have for they make me go to God upon my knees thrice a day, when perhaps otherwise I would not have gone once.” He lived to the age of ninety. During the 1600s, the Rose family proved to be staunch Covenanters and Kilravock was famous as a haven for those in need of protection during the troubled religious periods which preceded the Revolution of 1688. Kilravock Castle is being used as a Christian Retreat Centre today. The last Rose owner of Kilravock who was also the inspiration behind the creation of the Kilravock Christian Trust in 1971, Miss Elizabeth Rose, died on 9 December 2012 .

The 17th Laird of Kilravock Castle. He was an advocate and member of Parliament. 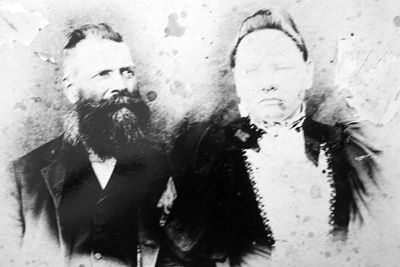 My great-great-grandfather John Rose, who came to South Africa and his wife, Catharina.

My great-grandfather Jacob Rose and his wife, Ren, who raised my mom as her mother, Anna Elizabeth, died shortly after she was born. And in the second photo above, the same great-grandma with her children. My grandma (my mom’s mother after whom I was named) is the young girl next to her. The photo was taken while Grandpa Rose was serving in the war. I knew grandma Ren very well, and admired her greatly. She had an indomitable spirit, a joie de vivre up till the very last moment. Sharp and shrewd, she was a mean bridge player, and actively lived  to the ripe old age of ninety-four. Her one daughter, Kittie, is still alive, almost a hundred now, and still played tennis until her early nineties!

My mother’s father, John Viviers, here with his sister and their team of donkeys. The Viviers were French Huguenots who had to flee France because of religious persecution, and settled at the Cape. Grandpa John eventually settled in Namibia, then known as German South West Africa, where he farmed near Mariental, but also owned other businesses. He was a big and a very strong man, and known as Groot (Big) John Viviers. I suspect, from stories that I’ve heard that he must have had a violent temper when he was young and I also know that there was a time when he drank excessively. Both he and my step-grandma, Hester, were excellent marksman. Here they are with some of the trophies they won in shooting competitions.

My grandpa John Viviers and his family. My mother is the young woman wearing glasses standing next to her father. My father’s ancestors, the Coetzee’s and Maritz’ mostly came from Holland and Germany. Some of my grandma Maritz’s family later took part in the Groot Trek. Whenever I would become even slightly discouraged, my grandma would admonish me not only to fix my eyes on Jesus, but also to, “Remember, your forefathers trekked barefoot over the Drakensberg Mountains!” Both families were God-fearing pioneer farmers, also elders and deacons in the Dutch Reformed Church right through from the early 1600s up till today! We grew up with grandparents and parents who were “teachers of righteousness”, intercessors and prayer warriors. They talked about God and Jesus Christ and the Holy Spirit as if they were family members (which indeed They were!). He was their constant Guide and Counselor, and the only books they read were the Bible and “Uit die Beek”, an Afrikaans daily devotional.  In both families devotions were kept daily and none were excused – from the littlest child to the eldest, and also all the farm labourers and their families, had to take their places in the diningroom or kitchen in winter. Oh, how well I remember those days! We really had to pay serious attention to what was being read and said, as both my father and grandfather read and prayed quite softly (and grandpa still prayed in High Dutch!), and afterwards we would be questioned on the Bible-reading. Sometimes the little ones would fall asleep, because the grownups really knew no time when they were praying and singing!

My great-grandfather Abraham Coetzee and his family in front of their “matjieshuis” (reed hut) on the trekpad through Namaqualand. 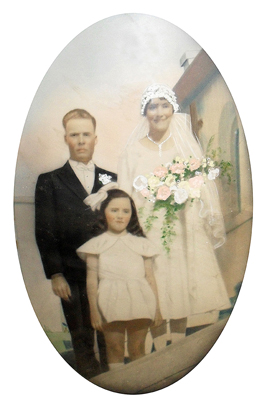 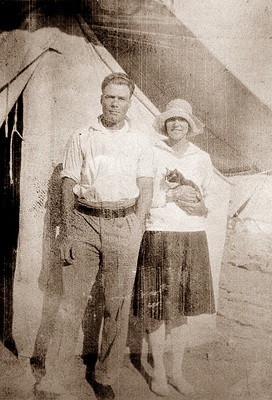 My father’s parents, Bertus and Miemie Coetzee, on their wedding day and in front of their tent at Boegoeberg where my granddad was a labourer helping to establish the Boegoeberg Irrigation Scheme. That meant hard physical labour, 6 days a week, from sunrise to sunset, breaking stone, digging canals and building the Boegoeberg dam with shovels and pick axes! Miemie died when my father was three years old. My grandpa Bertus always said that I reminded him very much of the late Miemie, not only did I look like her, but I apparently also walked and laughed like her. Grandpa Bertus later bought his own land and became a successful farmer.

My great-grandparents Maritz and their children. My grandpa Bertus Coetzee and grandma Miemie are the couple on the right at the back. Grandpa Bertus’s second wife, our beloved grandma Marie, was an altogether exceptional woman. She was only sixteen when she and grandpa got married and had to take on the responsibility of being a mother to his four-year-old son, my father. She and grandpa had seven more children and we, the granchildren, and our youngest aunts and uncles grew up more like sisters and brothers. Ouma Marie, as we called her, was deeply spiritual and a great support to her own husband who was heavily involved in church affairs as an elder who also often had to preach in the absence of a minister, head of the Sunday School and also as a community leader. I can only say that not only my father, but all of us, loved her deeply. Both she and our grandpa lived to a ripe old age. Here they are, shortly after their marriage, and in their old age.

Both sides of the family were very musical and could play various musical instruments – piano, guitar, violin, mouth organ, accordion, “traporrel” (antique reed organ) and concertina. And sing, my how they could sing!!!! My fondest memories are of the women singing, spontaneously harmonizing in various voices, while doing their household chores. In our own home we would often gather around the piano and at first either my father or mother would play, later I did, and we would sing hymn after hymn. We basically knew most of the hymns and gospel songs off the top of our heads 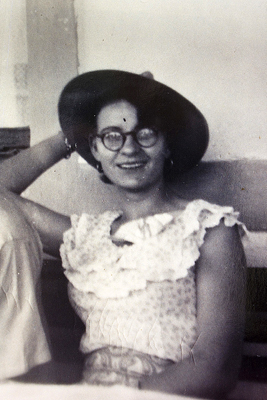 My father, Abé Coetzee, and my mom, Rina née Viviers, in their younger days. The other thing that sort of stood out in my mind, is that even though both families came through terrible hardships and worked incredibly hard all their lives, they never complained! We were never allowed to grumble or complain. No task was ever considered too hard, and no circumstance too challenging. Not while there was a Father in heaven who loved us, and not with Christ in us! Through Him, we were taught, we could do anything and were up to any and all challenges. No matter how severe. Both families were also known for their hospitality to family, friends and strangers alike. There were always enough food to feed another mouth and ample place to sleep, even if it meant us children sleeping in one bed or on the ground, so that the guests could sleep in our beds. Over high days and holidays when the family were gathered at my grandparents’ house, we young ones would all sleep in the lounge on what we called a “kermis” bed – a large communal bed made from stacking spare mattresses next to each other on the floor or sometimes layers of blankets if there were no spare mattresses. No one was ever turned away. The elders in our family adhered to Christ’s teachings, that what you did to another person, you have done to Jesus Christ Himself! Now, with that background, you will understand how I honestly cannot remember a time when I did not know the Lord, Jesus Christ. I always find it so amazing when I look back over the generations, to see how God has not only determined their set times and the fixed limits of the places where they would live, but He Himself, His Presence and Faithfulness, is the “Golden Thread” woven into the warp and woof of these families, holding it all together, and bringing it to a beautiful culmination in this age. The Word of God says that a three-stranded cord cannot be broken. What I see is His overshadowing of our family and people, and weaving, entwining His DNA into our human two-stranded DNA. His divine life brought life so that when I now look at all these faces, I know they are not dead, but alive in Him and part of the great cloud of witnesses cheering us on!!!!! Thank you Father for godly men and woman, and most of all for Yourself! (to be continued)

← Heaven’s Call to Awaken! ~ A Vision by Victoria Boyson
Resurrection of Dreams! by Joy Parrott →

4 thoughts on “To a Thousand Generations, Part 1… by Annalize Mouton”